A Cocker Of A Week 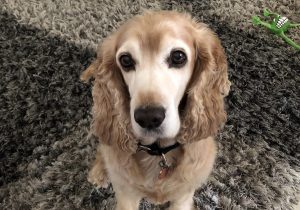 On the 20th of April, it is Beaus 11th Birthday and after the week he has had it will be amazing to see him making it in one piece. Darling Beau is usually a relaxed and calm Cocker Spaniel that is typically in good health (especially for his age) and tends not to have any accidents or injuries, the past week however seems to be the exception. So far this week he has had egg shell caught in his throat, got stuck under a bird cage by his collar and then had a huge piece of spear grass get stuck inside his ear. So let me elaborate on these incidents… 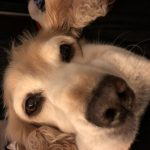 The eggshell in the throat. Well that was interesting, one minute he was fine and the next he started making a very strange swallowing motion. He just started continually swallowing and I instantly though something was stuck, but what? He had breakfast, hadn’t been outside and hadn’t eaten anything else (that I knew of). After a half an hour of continual swallowing, checking the throat, rubbing the throat and a conversation with my vet I thought it best to take him in to the vet be checked. He was becoming a little more anxious and distressed so it was clearly bothering him. After questioning the kids again as to if they had fed him something they revealed that he did steal some egg shell that they dropped while eating their breakfast. So the culprit was found, some eggshell. After discussing with the vet and an examination they though this was most likely the case and she did mention that egg shell can be quiet sticky and it may just be stuck to the lining of the oesophagus and irritating him. So we were sent home under supervision with a pain relief/anti-inflammatory injection and a medication to coat the throat/stomach lining. Later that afternoon Beau had a huge coughing fit and then walked off happy and the strange swallowing stopped, so clearly he dislodged it. So point of the experience, don’t steal egg shell and gulp it down quickly!

Next was the bird cage incident. We are currently bird sitting my brothers bird, an Alexandrine Parrot who comes in a huge 6 foot cage on wheels. Beau loved to climb under the cage on his tummy, as best as he can to scavenge for bird seed and other fun things to eat. Well this day upon backing out from under the cage his colour got stuck. So as Beau struggled pulling and pushing the cage around on his back, bird seed was spilling, water was flying and the bird was screeching, not to mention me trying to calm Beau while attempting to unhook him. Thankfully both bird and Beau survived the ordeal unharmed, just leaving a rather large mess to clean up. 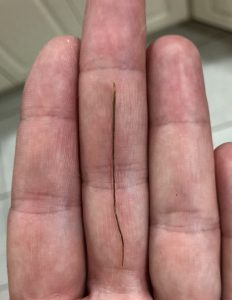 Then the most recent experience grass in his ear. During a nice afternoon stroll poor Beau managed to get a long piece of spear grass lodged down his ear. Anyone that knows spear grass knows that the tip/seed at the end is incredible sharp and it can in fact pierce the skin. Spear grass has been known to pierce into the skin causing abscesses, become lodge in ears and even travel through the back of the eye, they even travel from the initial point of entry and migrate to other parts of the body (even the brain). Poor Beau was significantly distressed and in a lot of pain, shaking his head and scratching his ear continuously. When the ear canal was held in the exact right position I was able to see the piece of grass in there. After a long struggle with him I was able to remove the grass using a pair of tweezers and no wonder it was bothering him, it was huge, I was so surprised by how long it was, see the picture to the right. Thankfully once removed he was instantly happy again, no more rubbing or shaking his head. I did give him a little pain relief just encase though.

So good old Beau has kept us on our toes this week. After a rather turbulent few days I am sure that Beau will celebrate his 11th birthday in style and will be spoilt rotten (even more than a typical day). Hopefully the rest of the week will be incident free!

The post A Cocker Of A Week appeared first on The vet-n-pet Blog.