I love this time of year, foaling season has started!

As the days start to get warmer and longer again, it becomes time for the sleepless nights as you start to keep an eye on the mares that are due to foal.  I love driving past all the horse properties and studs and looking to see if they have got any new foals.

Over the years my family; mum, dad, husband and I, have foaled down nearly 50 mares, so that is a lot of foal watch and a lot of sleepless nights.  It’s a very exciting time when you are a few weeks out from your mares due date with the anticipation of “will it be tonight” that a little foal is born.

We have always calculated the due date of our mares to be 11 months and 5 days after service / mating, making the gestation period around 340 days.  A 340-342 day gestation period for a horse is average, however it is not uncommon for mares to foal a week earlier or even a couple of weeks later then this.  In fact three years ago we had a mare go five weeks past her due date and delivered a perfectly healthy foal.

There are a number of signs that you can look out for that help indicate that foaling is becoming more imminent.  However, over the years we have found that every mare and every foal is different. Many times we have said “it should be tonight” only to be awake all night waiting and then not have a foal for another two nights.  Over the years we have come to the conclusion that you really don’t know 100% that a foal will be coming tonight until the mare actually starts foaling.

Up to a couple of months before the mares due date we start keeping a watch on them to see any changes in their udder, behaviour and health. 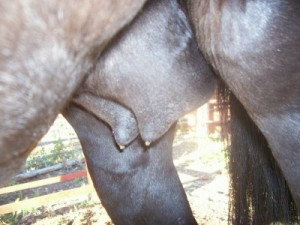 A “waxed up” mare.
Image courtesy of http://horseyard.com.au, author unknown.

It is important to keep a close watch on your mare throughout the pregnancy and particularly in the last few months because the last thing you want is a premature foal.  About a month out from foaling the mare’s udder may start to change and she will start “bagging up”.  The udder will gradually get fuller and larger usually coming up overnight and going down again during the day, until closer to foaling when it may stay full.  We have noticed that the amount of milk and size of the udder varies greatly from mare to mare.  We have had mares that have had barely any milk until after the foal is born and we have had mares that have dripped milk for weeks before the foal is born.  We have also had mares that just do not produce enough milk naturally and have had to receive medication, like Domperidone Paste and Oxytocin, to help them produce and “let-down” their milk.   Some mares will “wax up”, this is when little drops of colostrum form on the ends of the teats.  It is a small droplet that can vary in colour and when it does happen we have found that foaling usually, but not always, follows 12-36 hours later.

Vaginal discharge is another important thing to keep a watch on throughout the pregnancy, as it can be a indication of a infection in the placenta which can cause a mare to abort a foal or foal prematurely.  A little bit of discharge is common towards the end of the pregnancy and can often be an indicator that a foal will soon be arriving.  If the discharge is particularly thick, pus like or smelly, it would be best to contact a vet as there may be an infection or a problem with the foal that needs to be treated immediately.  In the weeks leading up to foaling the mare will start to “drop” or relax over the rump.  The muscles and ligaments in the pelvis and over the rump will begin to relax and the top of the tail will appear to drop.  The muscles relax in preparation for foaling and the foal making its way through the birth canal.  A couple of days before foaling the mare’s vulva will also start to relax and swell in preparation for birth.

Other signs we have seen in the hours leading up to foaling include restlessness, change in appetite, pushing bums against fences and posts, lying down, rolling, pawing, splashing in water buckets, pacing, tummy biting and frequent urination. Sometimes some of these are seen and sometimes none of these are seen.

We have a mare / foaling alarm that attaches to the mare’s head collar and when she lies down, and the alarm tilts, it sets a horrendous beeping alarm sound off in the house.  This does help for foal watch but we do spend a lot of nights up and down just because the mare is having a rest or rubbing their head on the fence.  We have also had mares not set the alarm off at all during foaling because they never lay flat out.  So the alarm is a great help but  it is definitely not the only thing to rely on during mare watch.

Another thing to consider is that although most mares will foal during the night some do  occasionally foal during the day.  We have had 3 foals born in the middle of the day, 3 born right after morning feed up and 2 born just before sunset.  So unfortunately foal watch is a 24 hour a day job sometimes.

It is also important to remember that mares have been delivering foals for many thousands of years.  Nature is a miraculous thing in that the mare naturally knows what to do to deliver their foal.  So although it may be somewhat safer or reassuring to be there to watch your mare deliver, it is not a necessity for every mare to have human intervention while foaling.

Ultimately all the sleepless nights are definitely worth it when you finally see your mare give birth to a beautiful baby foal.  To me there is no better experience than sitting in a paddock in the middle of a freezing cold night, peacefully watching a precious foal be born.

The post Foal Watch appeared first on The vet-n-pet Blog.