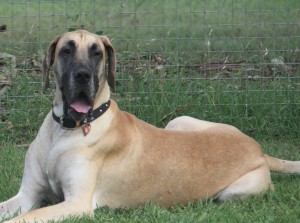 My brother’s dog “Junior” is a 2 year old, 83kg, Great Dane. He is a beautiful dog but it seems that with a big dog comes even bigger, and more expensive, problems.

About 9 months ago Junior suffered from a case of bloat. Before going out, my brother fed him as per usual and when he came home about 4 hours later he was blown up like a balloon.  Junior was very distressed, his heart rate was really high, he was panting and his stomach was bloated.  My brother instantly knew that he was really sick and rushed him down to the emergency after hours vet clinic.  The vet told him that he was suffering from bloat with a twisted stomach and needed surgery immediately.

Bloat or Gastric Dilatation-Volvulus (“GDV”) is a life threatening condition and common killer of dogs. GDV is when the stomach swells/bloats and then twists. Firstly there will be an excessive buildup of air, fluid, and/or gas in stomach. When the stomach swells it can, sometimes but not always, twist and cause air, fluid, gas and food to be trapped in the stomach. When the stomach bloats and twists it causes the veins in the stomach and abdomen to be obstructed.  This can lead to dehydration, low blood pressure, shock, damage to internal organs and then subsequently death.
(source: http://www.animalemergencyservice.com.au/pet-care/1/27-2-12/bloat-gdv-dogs )

Certain breeds are more commonly affected by bloat like Great Danes, Saint Bernards, German Shepherds or dogs with narrow deep chests.  There are also a number of things that may increase the risk of a dog suffering from bloat like stress, age, the build of the dog, exercising before or after eating or they can be hereditarily predisposed .  The biggest contributors to bloat are to do with eating habits, such as drinking too much water while eating, eating from an elevated feed bowl, eating only dry food or eating too quickly.  Rapid eating or gobbling the food can cause the dog to gulp air and not chew or digest the food properly.  My brother thought that eating too fast may have been a contributing factor as Junior is a guts and eats his food too quickly.  To solve this problem the vet suggested he gets a specially designed food bowl to help slow him down, similar to  Skid Stop Slow Feed Bowl.  These bowls have simple obstructions that stop the dog from being able to engulf large mouthfuls of food at once.

Junior is doing well now and has fully recovered from his surgery. During surgery they had to un-twist his stomach and he was fortunate enough to have no permanent damage. Junior now has to have three small meals a day from his special bowl.  He is not allowed to exercise right before or straight after eating and feed time has to kept as stress free as possible.  Now that Junior has had bloat he is more prone to having it again and it is something that will need to be managed for the rest of his life.

If you ever think that your dog is suffering from bloat please contact your vet immediately; as it is a life threatening problem that can quickly prove to be fatal.

Further information on Bloat or Gastric Dilatation-Volvulus, can be found on the websites listed below or please seek advice from your veterinarian.
http://www.michvet.com/library/surgery_gdv.asp
http://www.globalspan.net/bloat.htm
http://www.animalemergencyservice.com.au/pet-care/1/27-2-12/bloat-gdv-dogs

The post Junior’s Bloat appeared first on The vet-n-pet Blog.