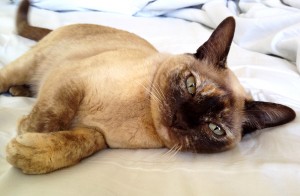 their beloved cat hacking and gagging as they try to vomit up a hairball.  Just recently one of mums cats, “Kit Kat”, a three year old Burmese started this terrible process of eliminating hairballs for the first time.  Vomiting up hairballs is a common and normal process that most cats will go through at some point.

Cats in general are meticulous self groomers using their tongue to clean themselves.  The tongue has tiny hook like structures that help in the grooming process by removing the loose hair.  While grooming, some of the hair may be ingested but usually it will pass through the stomach with the faeces.  Occasionally the hair can build up in the stomach and the cat will need to vomit it up, this is a hairball.  A hairball looks more like a long thin tube of wet hair rather than a ball.

Hairballs are more common in long hair cats like Persians or Maine Coons or cats that have a thick coat, or during times of shedding.  Some cats can be obsessive groomers and may experience hairballs more often.  As in Kit Kat’s case, it is not uncommon for cats to develop the problem as they get older and become more proficient groomers then when they were kittens.  It may also present itself when a cat becomes stressed or is anxious and starts grooming themselves a lot more.

In general, hairballs are not a health problem just rather disgusting to have to listen to and cleanup.  However sometimes the excessive buildup of hair in the stomach can cause a blockage if it is not passed easily.  If your cat is continually vomiting up hairballs it would be best to seek some veterinarian advice just to make sure there isn’t a blockage in the stomach.  If you notice any symptoms like continually gagging or hacking without producing a hairball, loss of appetite, lethargy, constipation or diarrhea contact your veterinarian immediately as these are symptoms of a life threatening blockage.

There are also a number of hairball productson the market that help hair pass through the system with greater ease.  A popular product is Laxapet which is a paste that you put on the cats feet or legs and they lick it off and ingest it. Laxapet acts as a laxative and contains a lubricant to help the ingested hair pass through with the faeces instead of building up in the stomach.  There are also specially formulated cat foods on the market like Hills Science Diet Feline Hairball Control.  This feed contains natural vegetable fibres that help control the formation of hairballs by assisting the hair to pass through the system.  The other thing you can do to help your cat avoid hairballs is to help them ingest less hair by giving them a brush.  Most cats love a brush and there are plenty of brushes available that have been designed especially for cats.  The Furminator De shedding tool for catsis specifically designed to remove the loose hair and is available in two varieties, one for short hair cats and one for long hair cats.

As for mum’s cat Kit Kat, her hair ball problem doesn’t seem to be of any concern at this stage.  It is only occasionally that she will vomit a hairball and it doesn’t seem to be effecting her in any other way, perhaps she was just shedding her thick winter coat.  So at the moment Kit Kat is just enjoying her daily brushes but if it does continue or become more regular mum has said she will probably give one the hairball products a go.