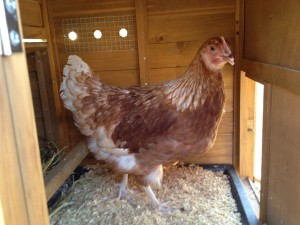 Sour Crop, what is Sour Crop you ask?  Well, I had to ask the same question this week when one of my chickens got sick so I thought I would share with you what I found out.

One of our chickens “Blondie” was perfectly fine one night and then the next morning she seemed a bit lethargic and depressed.  I gave her a quick check over and couldn’t find anything wrong with her so I put it down to the heat and hoped she would be better by the evening.  That night there was no improvement, in fact she actually seemed worse and I hadn’t seen her eat or drink all day.  So my husband gave her another check over and  discovered that her crop was very full and sounded fluidy.  So I did a bit of research and decided that it looked like she had sour crop or an impacted crop.  I spoke to our veterinarian who advised that we need to get the crop to drain.  So we turned Blondie head down, with her neck at about a 60 degree angle and after a few seconds a very sour smelling fluid started running out.  We tipped her back upright and let her have a breather for a few minutes.  We  then did it again while massaging her crop and out came more but it was thicker and more of a mushy pellet consistency.  After probably 5 seconds it stopped and we turned her upright and the crop was definitely drained and didn’t feel like there was anything left in there.  The terrible sour smelling fluid and mush confirmed that it was most likely sour crop she was suffering from.  After a little time passed we put her back in the coop, so she could sleep with her friends and feel safe.  I removed all feed and water overnight so that I could be sure that she didn’t eat early in the morning.

So what causes sour crop in chickens?  Sour crop occurs when the crop is unable to or takes longer than usually to drain, usually caused by some sort of blockage.  The blockage is usually caused by ingesting long strands of something like grass or weeds.  I think that this was most likely the cause of Blondie’s blockage as she had been out wandering in the back paddock which has some longer grass that she may have broken off in long strands.  These long strands then tangle and form a bundle or a ball that can’t move from the crop down to the gizzard to be digested.  When the food it sitting in the crop and mixes with water and digestive juices it ferments and goes sour, hence the term “Sour Crop”.  If the crop remains blocked for sometime it becomes the perfect environment for fungus to grow.

If you suspect your chicken is suffering from sour crop or a crop blockage you should contact your veterinarian for advice.  If the crop feels squishy or fluid filled it is more likely to be a soft food blockage, whereas if it feels hard it may be a blockage caused by a foreign object.  A vet will be able to advise the best options, either trying to drain the crop or to visit them for assistance.  If the chicken does not show improvement within 36-48 hours I would definitely visit a veterinarian to have the cause properly assessed.  Some chickens will require an anti-fungal treatment and/or an antibiotic to help clear up any secondary infections.  It is also possible that once the chicken has suffered from a crop problem that they are more likely to suffer again.

Thankfully, our Blondie seems to be back to normal.  I continued to monitor her crop drainage for five days and only fed her softer, more digestible foods.  She is now back on her normal feed, with her friend “Nuggets” and seems to be doing well.

The post Sour Crop in Chickens appeared first on The vet-n-pet Blog.