It was nearly four years ago when an unlikely friendship developed here on our farm, between our dog Lilly, a Magpie and a Chicken. 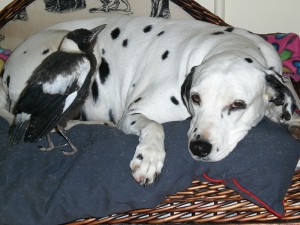 a
young Magpie that had fallen from its nest.  With no parents in sight and crows hanging around he decided it best to bring the Magpie home for me to look after.  The little fella was still young, he had some of his adult flight feathers but still couldn’t fly properly.  We decided to keep him in a box and feed him until Monday when I could get the vet to give him a check up.  After a vet check up established he just needed a little time to grow his feathers we continued feeding him and looking after him.  He lived in the house and on our deck in a cage most of the time unless we took him out with us for a walk around the stables.  Our dog Lilly became very fond of Buckley, as we affectionately named him.  They would spend a lot of time sitting together and he would chirp and sing to her while she looked at him rather intrigued as to what he was doing.

After having Buckley for about a month we ended up with a couple of week old chickens.  One of the chickens died so we were left with only one and the adult chickens wouldn’t accept it into their pen.  We decided to set up a stable for the baby chicken to live and we introduced her to Buckley.  Well it was a match made in heaven. Buckley took Chicken (yes that was her name, ever so original) under his wing, literally.  They instantly bonded and she would sleep underneath him until she became bigger than him. 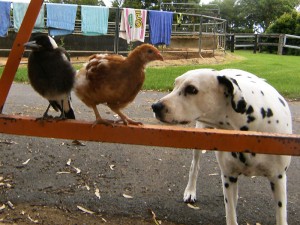 As time went on they became a part of our family.  In the mornings we would start work at the stables with a ritual morning conversation and scratch with Buckley and Chicken.  Then Buckley would fly up to mums house and sit on the verandah and screech until she came out to feed him his meat.  Even stranger, Chicken would jump up the 16 steps to the front door and and tap on the glass until mum came to the door. Anyone that visited our property couldn’t help but laugh at our Buckley and Chicken.  Wherever we were Buckley and Chicken were sure to be close behind.  If we were out working in the paddocks or feeding up Buckley would fly around following us and sitting on the fence watching and Chicken would run as fast as she could to keep up.  If we were doing vet work or scanning mares Buckley was there at our feet chirping or picking up bugs.  I remember having a few barbeques and all of a sudden Buckley would turn up at our house and stay until we were finished, then we would have to carry him back to his stable because he wouldn’t fly in the dark.  Lilly, Buckley and Chicken were all friends and Buckley would still come and have a sleep next to Lilly or sit right in her face and talk to her.

After a couple of years of Buckley always being around he started going missing for a day or two at a time.  The first few times we would walk around calling out for him as we were so worried that he was injured.  But after a few days he would turn up, sitting with Chicken at the top of a stable box.  He would stay for a while, slotting straight back into his old routine and then disappear again.  One time he was gone for about a week and then came back for a few days and left again.  Then his visits to see us became less frequent and then after a few months they stopped.  We like to think that he just found himself a girlfriend and has a little family of his own.   Chicken stayed with us and became friendly with the other chickens until a few months ago when she unfortunately passed away.

Everytime we see a Magpie it brings a smile to my face thinking about our dear Buckley.  It really was an unusual friendship between Buckley and Lilly and more so between our odd couple Buckley and Chicken.

I would love to hear about any other unlikely animal friendships out there so please let me know and even send in a photo.